A Quick Caveat: I happen to work at Facebook, home of the React team. While I have immense admiration for the work of the React team, I do not work with them directly. In fact, I don’t even do React development as part of my job. The work reported here was done entirely on my own time as part of maintaining Tabli and Tad, my hobby open source side projects. Any and all mistakes, terrible ideas, conclusions, opinions or recommendations included here are entirely my own, not those of Facebook or any Facebook team.

The Challenge of Asynchrony

One of the most challenging aspects of developing React applications is managing the interaction of application state with asynchronous operations. In the Redux ecosystem this problem is addressed by middleware libraries such as redux-thunk and redux-saga.

OneRef is a tiny state management library written in TypeScript for use with React. While developing OneRef, I struggled with how best to address the asynchrony problem. After considering some alternatives, I added a couple of additional primitive operations (mutableGet and awaitableUpdate) to the OneRef API. These additions seem to cleanly support interaction of asynchronous operations with application state, but the interface and implementation could be controversial. I am writing this post to present these parts of the API and solicit feedback from the React community.

A Quick Recap of OneRef

The core API of OneRef is:

The update function in OneRef is similar to the functional update variant of useState in React Hooks. The only slight difference is the additional ref parameter that is passed down through React views and into event handler callbacks.

Event handlers call OneRef’s update function to update application state, passing in a stateRef that is passed down the component hierarchy via props. For example:

Actions in OneRef are ordinary JavaScript functions that typically return a state transformer (a pure state to state function) that can be passed to update. For example:

At the top level, the application calls appContainer, which will create and inject the StateRef passed down the component hierarchy:

A more thorough introduction to OneRef, including this complete example, is provided in a companion post to this one.

To begin with, let’s consider a simple extension of the TodoMVC Example (from the introductory post) to support sharing a Todo list with several users. The complete working example is available on CodeSandbox and in the OneRef examples repository.

A real shared, multi-user Todo list would involve a fairly sophisticated synchronization protocol. For exposition, we’ll focus only on creation of new Todo list items by other users. The working Todo list app might look like this as new items are added by other users:

Let’s assume our Todo list server provides a very simple subscription API via a subscribe function that invokes a callback whenever an entry is added to the Todo list:

The relevant changes to index.tsx to implement this example are:

As with the basic version of this example, we call appContainer to create the top-level React application component. This time, however, we are passing an extra init argument, of type AppStateEffect<TodoAppState>. This is a function that will be called to perform any initialization side effects, in this case setting up the subscription.

The body of init sets up the subscription, calling actions.createTodo for every entry value provided by the subscription. Recall that createTodo returns a StateTransformer to calculate a new state (with entry added) from the existing state. In order to ensure this works correctly, OneRef guarantees that the StateRef value is stable across state updates over the entire lifetime of the top level application component instance.

In real applications, it’s common for actions to need to perform sequences of asynchronous operations, where operations later in the sequence are invoked only after earlier operations complete. The syntax for async blocks in ES6 support exactly such sequencing. And, as we have seen, there’s no problem with calling update from a callback context, including async blocks.

The challenge, though, is that update is a write-only operation, and does its work asynchronously — the update can not be applied synchronously to the current state since state must remain frozen throughout the current render cycle or callback. update allows the application to arrange for an update to application state, but provides no mechanism for invoking asynchronous operations based on the result of applying the update. This presents a significant challenge for classic Redux or OneRef as described thus far.

The extent to which this is a challenging problem is reflected in the length and breadth of answers to this StackOverflow question:

Tyler Long was kind enough to distill this question down to a concise runnable example made with create-react-app and create a Github repository with runnable versions of the various Redux and Redux-middleware solutions.

The OneRef implementation of the hello-async example, when running, looks like this:

Each of the buttons adds a label to the UI that is displayed for a fixed timeout period. After the timeout period, the label is hidden. A runnable version of this example is available on Codesandbox and in the oneref-examples repository.

As before, the application state is represented with an Immutable.JS Record:

The React UI is straightforward; the essential part is this:

This differs from previous actions we’ve seen in two important ways: First, stateRef is passed in directly to the action, instead of the action returning a StateTransformer that the caller passes to update. Second, this is an async function. Since it’s called from a non-async function (the onClick callback), showNotificationWithTimeout is effectively a co-routine that executes independently alongside the rest of the application.

The most interesting part of this action is the call to awaitableUpdate, a new primitive added to OneRef that has the following signature:

At first it seems a bit odd to provide an awaitable version of update — why should the application await on its own state updates? But recall that update must do its work asynchronously to ensure that state is consistent throughout a given render cycle or callback. The addition of awaitableUpdate solves an important practical problem: It enables an async block to resume after an update has been applied and see fresh data derived from the updated application state.

This enables writing complex application action sequences with linear control flow in the style of redux-saga (a source of inspiration for this work), using async functions instead of generator functions. Generator functions and redux-saga’s generalized algebraic effects are extremely powerful, so I don’t expect or claim that OneRef with awaitableUpdate subsumes everything that can be expressed with redux-saga. The hope is that the addition of awaitableUpdate offers sufficient expressive power to cover many essential use cases in real applications; that’s been my experience thus far on the examples I have tried.

In using this latest version of OneRef to port Tabli (a Chrome extension for tab management) to TypeScript and Hooks, I observed that, in many cases, action functions invoked as callbacks needed read access to the application state at the time the callback is invoked (as opposed to the time the callback was created), without necessarily needing to perform an update to the state.

A good example of this is the behavior of Tabli’s popout button: 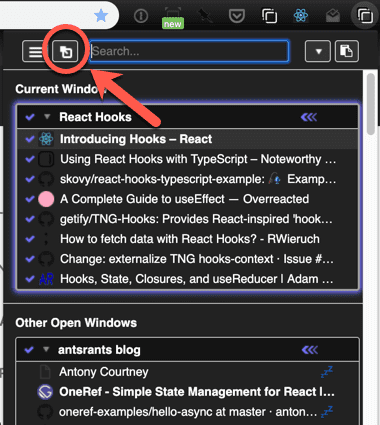 Tabli maintains a detailed snapshot of all open windows as part of its application state, including the current popout window. The implementation of the showPopout action in Tabli is:

This action makes use of mutableGet, another OneRef primitive API function with the following signature:

The behavior of mutableGet is what one would intuitively expect: it (synchronously) returns the current state value referenced by a stateRef. The verbose name of this function is intended as something of a warning label to indicate that repeated calls to mutableGet on the same stateRef at different points in the execution of the program may return different values. While it is reasonable to call mutableGet within the (imperative) body of an action function in response to an event, one should never call mutableGet directly in the body of a React functional component or render() method, since these should ideally be pure functions of their props that can be memoized with React.memo.

A final example of the interaction of application state with asynchronous requests comes from the Flux Challenge by Andre Staltz. The Flux Challenge is another example application for a real-time dashboard user interface for monitoring the movement of Jedi and Sith in the Star Wars Universe:

The application involves both subscribing to a web socket and issuing http fetch requests in response to user actions to populate the dashboard. The requirements for the challenge are quite intricate, but express the sorts of messy, complex requirements of real applications and asynchronous platform APIs. For example, the requirements stipulate:

The OneRef implementation of the Flux Challenge can also be found in the OneRef examples repository. Unfortunately this example also requires running a separate WebSocket server (provided in the original flux challenge repository), so I can’t provide a live version in a CodeSandbox.

This post is pretty long already, so I’ll forego a complete walk-through of this example. But awaitableUpdate enabled a fairly concise implementation of this example in OneRef. For example, here is the implementation of the async action invoked in response to updates to Obi-Wan’s position from the WebSocket subscription, to implement the behavior described in the above requirement:

This post presented a few examples to illustrate the use of awaitableUpdate and mutableGet, additions to the OneRef API to support interaction of asynchronous platform operations with application state. These additions to the OneRef API enable the use of ordinary ES6 async functions to express asynchronous action handlers, while still using pure, functional React components and pure functions for state updates.